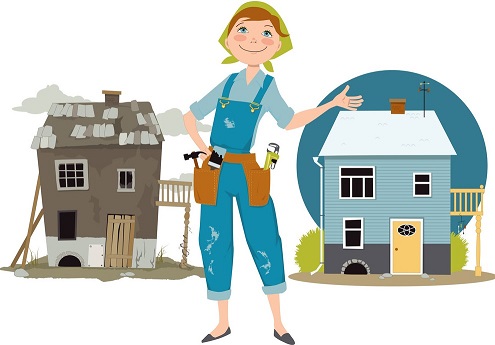 Skipping building permits and hiring unlicensed workers can end up costing you a bundle.

December 21, 2012 – MSN Real Estate – Marilyn Lewis Rules, permits, licenses, insurance. Our grandparents didn’t need all of it when they built and remodeled their home. Should we bother? Why not just forge ahead and cope with any fallout later?

It’s sure tempting, for one big reason: It’s cheaper. But you could pay a steep price for the savings.

With construction prices high, homeowners working within a budget may ask themselves, “What’s the harm in skipping all the red tape?” Permits and licenses cost money in a couple of ways. Alerting authorities that you’ve added 500 square feet to your house is likely to raise the assessment of your home’s value, for one thing. A bigger value equals higher taxes. And the permits themselves cost hundreds or even thousands of dollars, depending on your project and the fees where you live.

Homeowners may try to save by hiring unlicensed contractors. Some work for 20% to 50% less — big savings on, say, a $30,000 remodel. Unlicensed workers don’t have the expense of a state license, continuing-education classes, liability insurance and workers’ compensation coverage.

Tear it up, do it over

Despite the lure of these savings, you’re gambling by cutting corners. Maybe you won’t get caught. Municipalities often don’t look aggressively for offenses. But all it takes is someone — usually a disgruntled neighbor — to alert them and then you’re in for an expensive headache.

Each city and county enforces its rules differently, so it’s hard to know what will happen if you are busted. You’ll probably have to submit to an inspection. If the work was done to code but not permitted, you may only need to purchase the permit. But if the work is faulty, or if it’s hidden behind a wall, your expenses will start to climb.

“Let’s say [the homeowners] have illegally remodeled. They have to tear down portions of the wall so the city can see the electrical and plumbing to see if it was done to code. … Sometimes they just have to tear the whole thing out,” says attorney Linda Pieczynski, a contracting prosecutor for 12 municipalities in DuPage County, Ill., west of Chicago. Going after violators is part of her work.

Why do cities crack down so hard on violators? “The issue is safety,” Pieczynski says. A neighbor’s property could catch fire, or someone who buys the home later on could be hurt.

A few rural counties in the U.S. still have no building codes, but most places do. Yet the codes vary from city to city, county to county and state to state. The International Code Council, an industry group, offers its 2012 model code for cities, counties and states to copy. Most states have adopted it whole or with modifications. States can require their cities and counties to follow their version. Local governments can sometimes make their codes even stricter. (Learn more on building codes from the council’s PDF fact sheet.)

If you’re unsure whether you need a permit for a project, call your city or county

government and ask – anonymously, if you like. Describe your project and ask what the law requires. But be frank about your plans, Pieczynski says. She wrote “The Building Process Simplified: A Homeowner’s and Contractor’s Guide to Codes, Permits, and Inspections.”

Occasionally, a homeowner doesn’t fully describe the project, Pieczynski says. “They’ll say, ‘Do I need a permit to replace a window?’ And the answer is, ‘No, not normally.’ But if you’re really going to replace windows and add a sunroom, then, yes, you need a permit.” When they’re caught, they complain they were told they didn’t need a permit.

But getting caught may be the least of their problems. Construction done on the sly can haunt you for years because there’s nowhere to turn if:

– A bank declines to lend money on the home.

– Your contractor did a poor job.

– A worker is injured on your job site.

The bank snubs you

A remodel or addition done without permits may cause you no trouble at all until you decide to sell or refinance. At that point, the lender considering mortgaging the home will hire an appraiser who examines the structure.

Appraiser Randolph Kinney, in Carlsbad, Calif., sometimes uncovers illegal additions when a lender asks him to appraise a home. Kinney measures each home, calculating the square footage and comparing his results with county records. If his total is greater than the public record, it’s a tip-off that something’s wrong. He searches for permits issued to the home’s address. If he finds none, the bank may decline to issue a loan on the home.

Before the real-estate bubble and crash, lenders sometimes accepted construction done without permits. “But now they won’t,” Kinney says, because illegal construction is a risk for the lender. A fire insurance carrier, for example, may refuse to honor a claim. “If there’s a wiring problem or something happens to where it burns the structure to the ground, it voids the insurance,” Kinney says.

Even if a bank agrees to lend on your home, your problems are just beginning. When you try to sell, illegal construction can become an issue. Smart homebuyers and their agents are learning to search county records for details on homes they’re interested in. Illegal construction is likely to turn off potential buyers. The offers you do get may be lowballs, since buyers will want to account for the cost of fixing the home to code.

Even if you play by the rules, you could be hurt by illegal construction. If you innocently bought a home with building-code errors or violations, you will probably be held accountable. “Most people we try to work with, we realize that you didn’t do the work, this was the previous owner. But you’re the one who’s responsible for making it safe,” Pieczynski says.

It is a lesson that a young single mom in Sarasota, Fla., learned the hard way. Greg Yantorno, chief building official for Sarasota County, tells the story. The homeowner, whom Yantorno did not name, paid $98,000 in November 2011 in a short sale for her first home: a three-bedroom, two-bath ranch for herself and her young son.

Soon after moving in, she called a plumber because sewage had backed up into her child’s bathtub. The plumber, finding code violations, summoned a contractor who alerted the county. The additions were done, it turns out, without permits, by enclosing a carport.

“Based on what I’ve observed, it certainly wasn’t a licensed person doing the work,” Yantorno says. A load-bearing support post had been removed, putting the roof at risk of collapse. Correcting the problems — reinstalling plumbing and removing and restoring a wall to reach it, hooking up to city sewers, reinstalling windows and rebuilding a lanai — will cost the homeowner $25,000 to $30,000, the contractor estimates.

She can’t sell it until the numerous code violations are fixed. Unfair as it is, “she’s stuck with it,” Yantorno says. “It’s her problem now.”

Substandard construction is nothing new. But it seems to have been popular in the foreclosure crisis. “A lot of unlicensed people were doing work. People were flipping houses, doing a few repairs and trying to sell them. Owners were trying to do work themselves,” Pieczynski says.

The lesson: Investigate any home purchase thoroughly before buying, even if the house seems in perfect condition:

– Get the history: Ask the homeowner or the listing real-estate agent for a history of work done to the home. “If you ask the seller, ‘Did you have a permit for this?’ and he lies to you, you may have an action for what’s called a ‘fraudulent conveyance,'” Pieczynski says.

– Find the record: Visit the city or county permit agency to see the file for the address of the home you’re considering. The file should contain any building permits taken out for the home. It’s a red flag if you know work was done but you can’t find the permits.

– Get help: On the International Code Commission’s map, you’ll find permit information and contacts for many local and state building and licensing authorities. Caveat: Not all cities and counties participate.

Even if a permit isn’t required, you’re supposed to hire licensed and insured workers. Do-ityourselfers usually get an exception, but they must use licensed professionals for structural, electrical and plumbing work. The exception doesn’t cover your brother-in-law or his pal Morty, the unlicensed contractor.

Each state differs in its approach. California, for example, requires licensed workers for “all but the most mundane forms of home maintenance,” says Peter Brewer, a Palo Alto, Calif., attorney who’s an expert in housing and real-estate issues. “Cleaning your windows, no. Replacing your windows, yes. Doing roof repair, absolutely. Building a fence, yes,” Brewer says. Call your local government to learn the requirements.

It’s tempting to hire someone cheap, but the drawbacks can be severe. “If you don’t have a contractor and you hire unlicensed persons, you are the de facto general contractor, and you are on the hook for defective work for up to 10 years,” Brewer says.

Even a contractor’s license doesn’t completely protect you. A contractor also needs two kinds of insurance: liability, to compensate you if the work fails, and workers’ compensation insurance, in case someone is injured on the job.

– Ask to see a contractor’s license and proof of insurance.

– Phone your state licensing agency (found here, through the National Association of State Contractor Licensing Agencies or at the Contractors’ License Reference Site) to confirm it is current.

– Phone the insurance agent to ensure that the policy is in force.

Otherwise? Well, here’s another cautionary tale, from a cooperative housing community in Washington state. The group hired help to build a community hall, followed all the rules, obtained permits and purchased workers’ comp insurance for its contractors and volunteers.

But after most of the work was finished, they hired a contractor for one more job. A member of the community recalls, “We did not know he had recently dropped his license and coverage. We should have verified his coverage, and we did not.” The worker fell from a ladder. His medical care cost the community thousands of dollars.

Aaron was fantastic. When my husband arrived at the house for the inspection start time, Aaron was already there and had been working for 30 minutes.... Read More »
View All Testimonials →